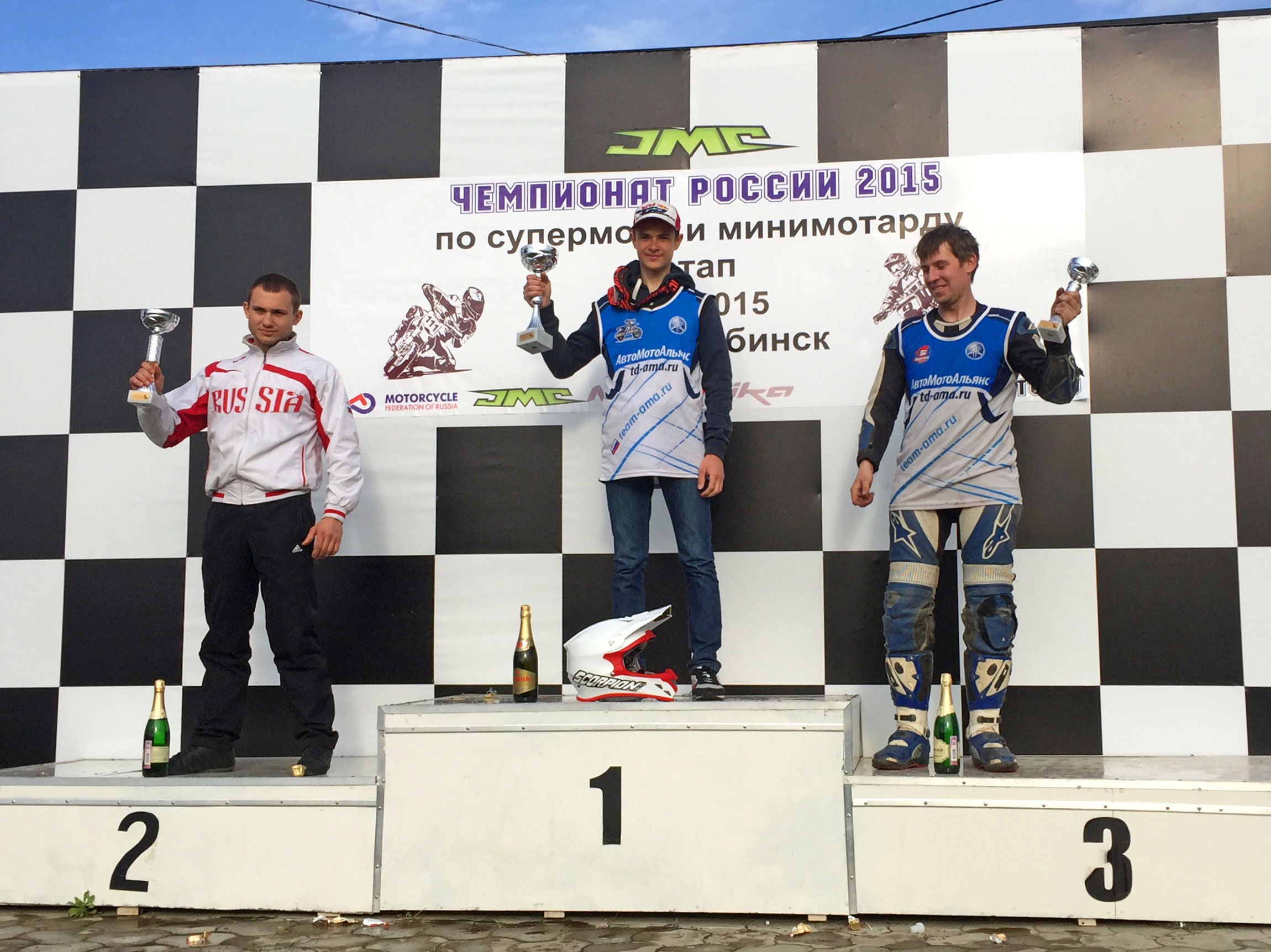 Russian motorcycle rider Makar Yurchenko won a landslide victory in the first stage of the Russian Supermoto Championship in the AvtoMotoAlyans team led by Artem Teslenko. The competition was held last weekend in Ust’-Labinsk kart circuit “Pilot”, a part of the sport-technical complex of Krasnodar region.

Supermoto is the youngest and non-standard view on motorsport, which is interesting primarily due to non-uniform route, consisting of two completely different surfaces – asphalt and off-road sections (30-40%). The difficulty for the riders is the riding on slicks on a dirt surface, which raises the possibility of a good extreme fight with competitors.

This season Makar Yurchenko participated in two classes: Pros (group A) and MiniMotard (Pit Bike). Last year Makar had already participated in Russian Supermoto Championship on the final stage in Kursk, taking the victory for himself. A 16-year-old rider had to compete with the top three contestants: Alexander Latyshev, Maxim Averkin and Aleksey Orekhov.

This year in Ust’-Labinsk Makar had to compete with a strong contestant Aleksey Orekhov among the other riders. After the tight battle for the victory Makar was able to create a comfortable lead over Aleksey, with a difference of 18,042 seconds.

In the second race the riders made their fans worry, showing brilliant “game positions”. Aleksey Orekhov showed great results in off-road sections while Makar overtook him on the asphalt area. As a result Makar Yurchenko finished first with an advantage of 42,239 seconds.

Makar Yurchenko: “From the first trainings here in Ust’-Labinsk I was very confident as a rider, with each session improving lap times. I was confident in my abilities and my motorcycle, everything was going as planned. As a result, I won both races”.

Young motorcycle rider Makar Yurchenko managed to lead his team AvtoMotoAlyans to the glorious victory, earning 50 points in the standings, and setting the absolute track lap record of 1: 29.367.

Makar Yurchenko: “The first stage of the Russian Supermoto Championship took place in the south of Russia, in the Krasnodar region, city of Ust’-Labinsk. While in Moscow there is still snow,  here it is quite warm and temperature allows to hold competitions! These days I had a very productive test with all motorcycles my team AvtoMotoAlyans had in its disposition. Every year Russian Supermoto Championship attracts more and more participants, and this is good news! In general, the stage was very positive and productive. I am pleased with the result I have and determined to win the second stage, which will take place in Moscow, May 17th, on kart circuit “Firsanovka”. This will be definitely a good show! “.

Makar Yurchenko: “I am excited to know that Vladimir Leonov will participate in all stages of the Russian Cup on MiniMotard. It’s a good fight, it is a wonderful training. When there is a strong competitor – you’re always going faster, trying to overtake or get away from him, trying to get a maximum time gap. Such a struggle is much more interesting and gives a strong desire to move forward. “

On the day of the race Makar had to replace his bike for another one due to the technical issues. As a result, Vladimir Leonov won the leadership in the qualifying race – Makar Yurchenko gave him a time advantage only of 18 thousandths of a second.

Despite the 2nd place, Makar put an absolute record on the track in Minimotard class – 1: 01.208.

Makar Yurchenko: “In Ust’-Labinsk I spent 3 training days and 1 competition day. I was totally ready for the championship. During my trainings in Spain, I gained all the necessary experience and did a great job of endurance, improving here with every lap. Russian Supermoto Championship helps me to continue a constant preparation for the Red Bull MotoGP Rookies Cup, the first stage of which will be held in Jerez de la Frontera, Spain,  on May 2-3. “

The final race of the season began with oil spilled on the track.